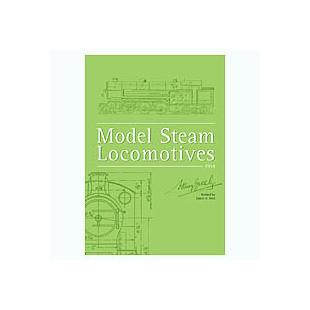 I have wanted to reprint this book for many years and am very grateful to Henry Greenly’s Estate for their permission to now do this.

Greenly’s The Model Locomotive was published in 1904 and formed the basis of the first edition of this book, published in 1922. Five further revised editions appeared over the years before the outbreak of World War II, a seventh edition appeared in 1951, and the eighth edition, reprinted here, appeared in 1954. The last two editions were revised and updated by Greenly’s son-in-law Ernest A. Steel, with considerable input from Greenly’s daughter Elenora, but remain very much the work of Henry Greenly.

Perhaps because of the amount of work he undertook for Messrs. Basset-Lowke, Greenly’s experience of designing and building model locomotives covered all gauges from Gauge 1 to 15" gauge, and the major changes between editions of this book chart the gradual increase in gauge of the models being built by model engineers, with 5 and 7-1/4 gauge practice becoming more and more prominent. However, the smaller and larger gauges are also well covered, and this range of gauges is unique to this title.

Unlike ‘Curly’ Lawrence (“LBSC”) who took over from him as the major writer on model locomotive building in “Model Engineer”, Greenly was a professional engineer with very wide-ranging experience, and this is reflected in the pages of this book, where the writing is more direct than “LBSC” would have used (and more succinct as a result), and there are considerably more drawings and photographs. And a fair few of these cover 71/4” gauge and larger, a much greater range than “LBSC” ever covered.

The first four chapters are general, covering choice of scale and gauge, locomotive types, principles of model locomotive design and boiler design. Twelve further chapters follow, each devoted to specific parts of the locomotive. All are very fully illustrated with drawings, tables, and photographs - many of the latter illustrating models built by some of the twentieth century’s finest builders.

Any book which effectively remained in print over fifty years has to have been top quality, and a century after the first version of it appeared, Model Steam Locomotives remains one of the very best books written on building model and miniature steam locomotives, and one which will prove an invaluable reference for locomotive builders in the 21st century.