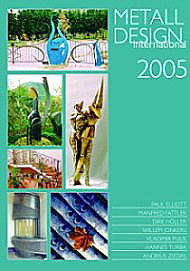 THIS BOOK IS OUT OF PRINT. THE PUBLISHER HAS NO MORE STOCK. THESE ARE OUR LAST FEW COPIES.

This is the 2005 edition of Peter Elgass's excellent, useful, and praiseworthy annual project of photographically documenting the work of several different master blacksmiths from around the world. Each annual has a brief biography of the smiths and a large number of beautiful photographs of their work. Each annual, in fact, contains hundreds of high-quality photos.
In the words of the editor:
"This yearbook is the "most youthful" of all those published up to now. With Andrius Ziedas from Lithuania, it is the first time that we can present a 21-year-old blacksmith who is at the beginning of his professional career and nonetheless can look back on a variety of works like others can only after a decade. And Paul Elliott, the British representative in this book, is a young one in his trade as well. He is one of the new school on the island. These powerful and very expressive blacksmiths in England, Scotland and Wales have made sure that forge-work has become "valuable" again in the eyes of the customers. Their works are not only admired by many colleagues in Europe, they are also being sold - which in the end makes the success. Let yourself be inspired and enthused by Paul Elliott's ideas and practical works.

"Metall Design International 2005" also has the courage to present two "outsiders", one the Slovakian artist Vladimir Pulis. He is an exceptionally gifted blacksmith who, however, is even better known in the field of knife making as an all-rounder and perfectionist. We are present both fields of his work here. Hannes Turba from Vienna is the second candidate, who is out of the ordinary. He is a well established metal artist, but nonetheless he belongs in this book. Contrary to many others in this field, he produces his works himself. Piece by piece he welds together the "human skin" from pieces of brass. He is both an artist and a craftsman.

The Dutch Guild of Blacksmiths is represented in this book by Willem Jonkers III. He is a blacksmith heart and soul. He draws his power from the smiths' art of previous generations, in particular, when demanding restoration work is concerned. But, the Dutchman is also equally perfect in today's symbolism.

The two metal designers Manfred Fattler and Dirk have both conquered their firm place in the German scene: Manfred Fattler in the south with his regional idiosyncrasies and his straight symbolism which nonetheless leaves room for forging. Dirk keeps to the north and proves that there is no established metal designer scene. Both craftsmen are "full-blooded" blacksmiths who also use any other technique known in metal design to implement their individual ideas in and around the building trade." - Peter Elgass