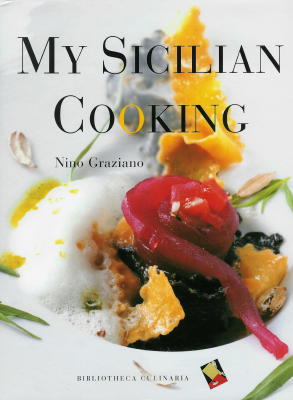 My Sicilian Cooking by Nino Graziano

From its privileged position at the crossroads of gastronomical cultures, Sicily is no stranger to the ways of fusion cuisine.
Rich in culinary tradition, its nobility can claim a long history of cultivating fine chefs; its convents and pasticcerie have produced exquisite sweets for centuries while its surrounding sea and rich volcanic soil offer an embarrassment of riches.

A contemporary chef could easily feel the weight of so much history; dazzled, he might lose his way among the baroque array of aromas and spices. Not so Nino Graziano.

At Il Mulinazzo he has succeeded in creating a Sicilian cuisine which is respectful of tradition, but not governed by it. He has conserved a spirit of abundance without ever veering toward excess. He has earned two Michelin stars and piqued the curiosity of many fellow chefs. In short, Nino is cooking up some very interesting food just outside of Palermo.