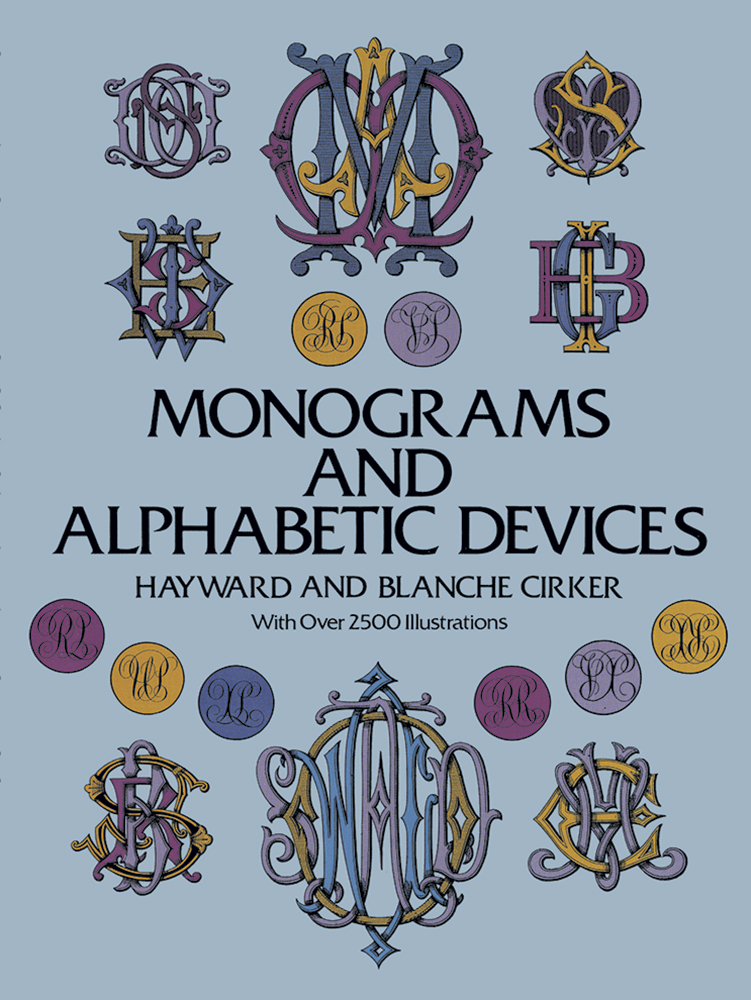 This book contains the entire contents of four fine volumes of monogram and allied devices published between 1830 and 1881. Over 2,500 monogrammatic and alphabetic designs are displayed in plates from "Dictionnaire du Chiffre-monogramme," etc., by Charles Demengeot (1881); "Monograms and Ciphers," by H. Renoir (1870–74); "Knight's New Book of Seven Hundred & Fifty Eight Plain, Ornamented & Reversed Cyphers" (1830); and "Monograms in Three and Four Letters," by J. Gordon Smith (n.d.).

There are monograms in every two-letter combination and extensive selections of three and four letters; name devices ("Alice," "Theodore," etc.), crowns, crests, coats of arms and helmets.

There are heavy, intricately entwined monograms that appear as though engraved on metal; lighter, thick-and-thin script styles; fanciful and formal designs; monograms in circles, ovals, square shapes, and free outline; and an immense variety of letter styles, including many designed for the particular device.

A notable feature of this volume is the Index of Monograms and Ciphers, listing alphabetically every letter combination shown and the page or pages on which each appears ("S W", for example, is drawn in three different styles; "A L" in five; but "F N H W" in only one); and an Index of Names and Devices. Both features add greatly to the usefulness of the book.

Importantly, every device shown may be reproduced by the purchaser free of charge.

Artists, designers, engravers, and craftspeople will find this book a prolific source of inspiration and unusual styles; typographers, calligraphers, draftspeople , and students will use it as an aid in creating their own letter designs; while those in the printing, publishing, advertising, and allied fields will call upon it whenever a distinctive monogram or decoration is needed. Dover Original.