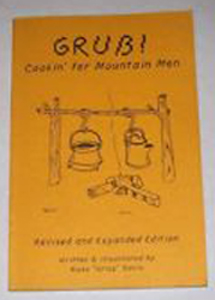 "Grub! - Cookin’ fer Mountain Men" was written by Russ "Grizz" Davis (author of  "Gabbin' - An Illustrated Basic Glossary (The Vocabulary and Dialect of the Mountain Men)”. It is the cookbook every mountain man has been looking for.

No longer must one wonder if what is in the pot is really what a genuine mountain man would eat. The author was a Buckskinner long before the term came into use.

This cook book explains from pots to pasta what it takes to cook in the wild. Each recipe has been refined until every one is guaranteed to be “lip smackin” good.

Written in the vernacular only true mountain men completely understand, it is still possible for the greenest pilgrim to figure out how to make larrapin vittles.

Soft cover, x format, 118 pages of recipes and mountain man philosophy, mostly recipes. A few illustrations are included for those who have trouble with words.

Following is a clearly written and honest review of the book by one of my personal favorite writers on survival, John Smith over at Destiny Survival.

“It’s a bit out of the ordinary. However, it should prove useful if you’re looking for “down home” recipes to put in your survival kitchen.

Whether you’re planning a wilderness camping trip or want to try some old fashioned recipes at home, you’ll appreciate this book. It uses basic ingredients, like flour, salt and corn meal. Many recipes call for bacon grease or other cooking oil.

The chapter on bread gives a couple of basic mixes and recipes for biscuits, pancakes, skillet bread, fry bread and more. Recipes for hardtack and parched corn are in a later chapter on “Pack-A-Longs.”

The chapter on meats and stews tells you how to make jerky, pemmican, salt pork, fried chicken, gravy, and more.

There are other recipes for sweet and sour spuds, Indian stew and Hoppin’ John, in case you want to use up black-eyed peas.

The final chapter of recipes has directions for making burgoo, a catch-all stew that can feed several dozen or several hundred.

Regrettably, GRUB! Cookin’ Men is difficult to read for a couple of reasons. The printing looks like it was done on an old dot matrix printer, giving it the appearance of having been hand printed.

It’s also written in dialect with misspellings and contracted words. That may be clever to fit the mountain man theme, but tends to make it a bit tough to get through.

Nonetheless, this little book is a great resource for old fashioned and sometimes hard to find basic recipes.

You may not be cooking for mountain men, but if you want to know how to cook like folks did in times past for survival in the future, get GRUB! Cookin’ Men and explore the possibilities”. - John Smith, Destiny Survival

Gabbin' - An Illustrated Basic Glossary (The Vocabulary and Dialect of the Mountain Men) by Russ "Grizz"Davis
$6.50

Gabbin' - An Illustrated Basic Glossary (The Vocabulary and Dialect of the Mountain Men) by Russ "Grizz"Davis
Price: $6.50