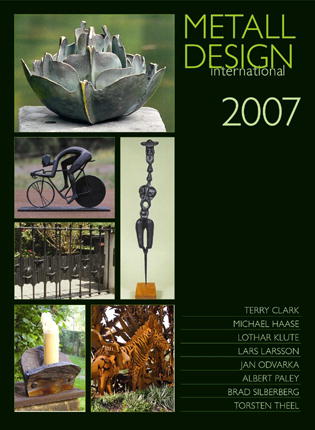 All eight designers in the 2007 edition of this series fulfil a maximum of creative claims and are unmistakable in their use of forms. America's Albert Paley belongs to the most well-known and prominent group of metal designers today. Terrence Clark's forged-works are characterised by the "English school"; seriousness mixed with hints of English humour. Brad Silberberg: for over 25 years he has been working with metal and is one of the leading blacksmiths in the USA. Lars Larsson: contrasts which create an area of conflict characterise the works of this Swedish metal designer. Jan Odvarka: this young, Czech, Turnov-graduate introduces his amazing large oeuvre to a broad public for the first time. Michael Haase has no fear of contact with modern technology or craftsmen from other trades, who he consults when he makes the 'unusual' become 'normal' in his work. Torsten Theel: three factors turn his work into modern metal design: "the knowledge of handicraft, traditional and contemporary techniques", "the gift to see and understand natural shapes", and his own imagination." Lothar Klute: an aggressive designer and fervent critic of current developments in the blacksmiths' trade, shows his concept of modern metal design.The carefully investigated texts are in German and English. They give detailed information about the very different philosophies of these artists and open up the way for the readers to an understanding of their works for the house, garden, park, urban space and church area.