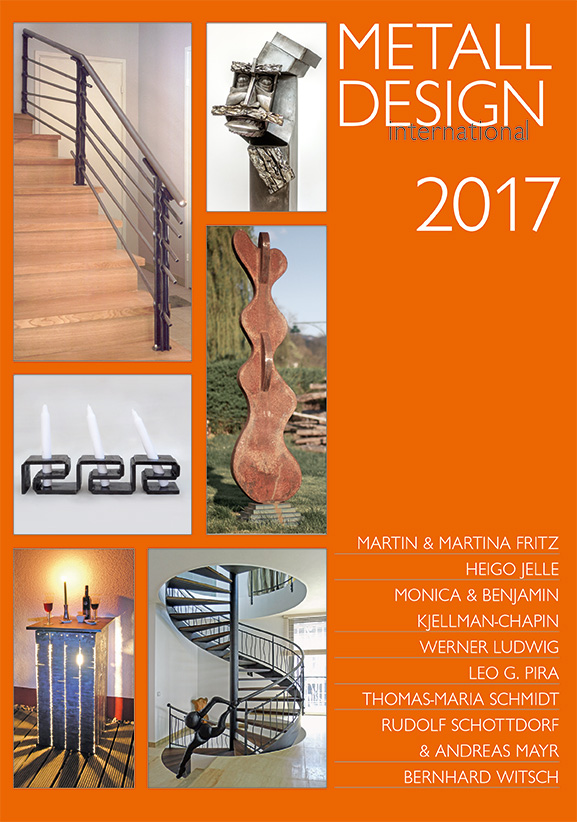 Another volume has been added to the “METALDESIGN international” yearbook series. Once again the new book presents eleven international metal designers. Classic blacksmiths, artists, metal designers and specialists from Germany, Austria, Estonia and Norway. METALDESIGN 2017 is the nineteenth yearbook published by the HEPHAISTOS publishing company.

The editorial staff always tries to bring very different characters together between the book covers. This time for instance the Austrian Rust Baron Bernhard Witsch with his artistic sculptures, his expansive legendary figures. In a sharp contrast, we have the two young Berlin residents by choice, Rudolf Schottdorf and Andreas Mayr, who have embarked on a mission to conquer the world of modern design. The works of Thomas-Maria Schmidt, Leo G. Pira and Werner Ludwig, who successfully carry on the tradition of the genuine blacksmith shop, constitute another opposite. With them the fire still burns every day.

They are joined by a representative of the academic blacksmiths from the European east: with the works of Heigo Jelle from Estonia, the book presents metal design from Eastern Europe that takes an entirely different metal design direction. This time the far north is represented by Monica and Benjamin Kjellman-Chapin, both metal designers and technical instructors in the blacksmith trade from Norway who, at the world’s largest blacksmith convention in Belgium, recently created a stir with their fence element for the monument in memory of the battles during World War I. The blacksmith Martin Fritz from the Allgäu offers you deep insights into the world of trophies and cups.

Counting the blacksmiths, metal designers and artists in this edition, we have presented 167 very different people from five continents with their works in the 19 volumes to date.  These designers came and come from 25 countries around the world. Nearly all books in this series are still available.